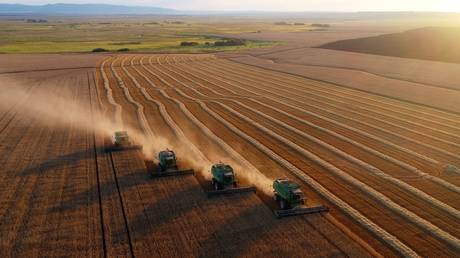 This year’s grain production is expected to reach a record 150 million tons, the president says

Russia is expected to reap its largest grain harvest ever in 2022, President Vladimir Putin said on Tuesday, citing preliminary data on crops.

“According to experts, the total grain harvest could reach 150 million tons, including about 100 million tons of wheat. This will be a record in the entire history of Russia,” Putin said, noting that previous estimates had ranged from 140 million tons to 147 million tons.

The president recalled that Russia’s biggest grain harvest ever was recorded in 2017 – 135.5 million tons, including 86 million tons of wheat.

“Thus, in the current difficult situation, we are completely guaranteed to cover our own needs for the most important items and receive an additional resource for increasing exports,” Putin said.

Statistics show that, so far this year, some 138.7 million tons of grain has been harvested, which is about a third more than in the same period of 2021.

Russia has become the world’s biggest exporter of grain in recent years thanks to bumper harvests and attractive pricing. Since the early 2000s, its share of the global wheat market has quadrupled. In 2018-2019, Russia delivered 35.2 million tons of wheat to the global market.

The country is projected to retain its leadership in the world’s wheat market in the coming years.