Forget what you’ve been told — drinking two cups of coffee every day may not be bad for your health.

In fact, scientists now recommend it.

For research has shown coffee lovers tend to live longer and have healthier hearts than peers who don’t indulge in a daily cup of joe.

And experts said the benefits were true for all types of coffee, meaning it’s not just decaf drinkers who benefit from its supposed effects.

The Australian researchers behind the study say their findings suggest a moderate coffee habit can be considered ‘part of a healthy diet’.

Two to three coffees — the amount recommended — is in line with what the average Briton and American drinks. 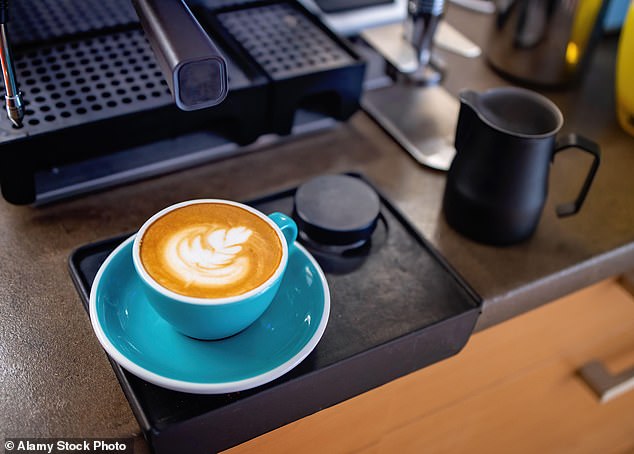 Drinking two to three mugs daily — in line with the amount consumed by the average Briton and American — is linked to living longer and a lower risk of heart problems, according to researchers in Australia

HOW MUCH COFFEE SHOULD I DRINK?

The NHS says it is fine to drink coffee as part of a balanced diet.

Besides caffeine, the drink contains many minerals and antioxidants.

Some studies have found it can reduce the risk of cancer, obesity, type 2 diabetes and dementia.

However, other studies have found it can increase the risk of suffering from high blood pressure.

It advises switching to other non-caffeinated drinks.

The researchers, based at Melbourne’s Baker Heart and Diabetes Research Institute, said there is little information on how each type of coffee impacts heart health and survival rates.

To get to the bottom of this, they examined data on 449,563 people included in the UK Biobank.

The massive database contains the health records on half a million Britons, who are regularly quizzed on their lifestyle habits.

Participants, who were aged 40 to 69, completed questionnaires on how many cups they drank per day and whether they opted for instant, ground or decaffeinated.

The findings, published in the European Journal of Preventive Cardiology, show 44 per cent drank instant, 18 per cent ground and 15 per cent decaf.

Just over a fifth did not drink coffee.

Over the course of the 13-year study, nearly 28,000 participants died.

Some 43,000 developed cardiovascular disease and 30,000 were diagnosed with arrhythmia — an irregular heartbeat.

All types of coffee were linked with a reduction in early death from all causes, with two to three cups per day linked with the lowest risk.

Those drinking that much ground coffee were 27 per cent less likely to die early than non-coffee drinkers.

Meanwhile, decaf fans had a 14 per cent reduced risk and instant was linked with a 11 per cent drop.

And all those who drank coffee had a reduced risk of heart disease, heart attacks and strokes.

The sweet spot was, again, two to three mugs, which was linked to a fifth lower risk among ground coffee drinkers, a nine per cent decline among instant coffee fans and six per cent reduced likelihood among those who drank decaf.

Coffee beans contain more than 100 biologically active compounds which are ‘likely’ behind the findings.

Some have been shown to reduce inflammation, others improve insulin sensitivity and boost metabolism.

Caffeine can be ruled out as the only driver of the health benefits, due to the decaf coffee results.

Professor Peter Kistler, a cardiologist and lead author, said: ‘The results suggest mild to moderate intake of ground, instant and decaf coffee should be considered part of a healthy lifestyle.’

The researchers noted that coffee intake data was self-reported and was assumed to remain the same throughout the study, so may be inaccurate.

Dr Duane Mellor, a dietitian from Aston Medical School in Birmingham who was not involved in the study, said the study does not prove coffee’s health benefits.

He added: ‘It is important that a simple cup of coffee perhaps with a little milk is very different to a large latte flavoured with a syrup and added cream.

‘So, moderate coffee consumption might be associated with lower risk of heart disease, but it is how it is consumed which is important.

‘So ideally without added sugar and other calorie rich extras. And think carefully about any snacks such as cakes and biscuits which you might be tempted to include with your coffee.’

Medics warn that drinking excessive amounts of coffee can damage the heart.

Additionally, too much coffee can lead to dehydration, as it causes the body to pass urine more often. It can also damage the teeth if it is packed with flavoured syrups and sugar.

However, dozens of studies have highlighted the benefits of drinking a few cups per day.

Earlier research shows the beverage can slash the risk of heart disease, heart failure and stroke, as well as prolonging life.

Experts believe one mechanism behind the findings is that caffeine boosts the process important for repairing heart cells.

Next post Somerset hotel review: The Mail’s Inspector checks into Locanda on the Weir in Exmoor National Park